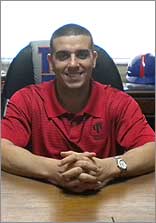 Andrew started at Trailco Inc. in NJ in 2004 after earning his Bachelor of Science at Fairleigh Dickinson University but started learning about his future career in the trailer repair business at a very young age observing his father, Cas, who owns and operates Trailco Group. In 2006, Andrew was promoted to manager of Trailco Inc. As his experience grew so did the business which led him to his next position within the company as COO. For the last 3 years, Andrew has been the CFO at Trailco. He is married with 2 children.